Posted on September 24, 2017 by Redband Station

The time has come for us to rescue Betty’s brother Stuart from a mining camp in the Appalachian mountains called Camber Mine.

Camber Mine is owned by Owen Camber, the son of Delco Camber a Lt. in the Confederate Army. During the American Civil War, Delco’s unit was wiped out in the woods outside of what is now Camber Mine in Kentucky. It is unknown exactly what happened, but Union forces were blamed for the massacre.

About 7 years after the war was over (1872), Delco came back with money and began a timber businesses. Felling the trees in the area his men had died 9 years before (2 years before the end of the Civil War). The timber company flourished with business, but for an unknown reason the company was selling its timber for less than the cost of cutting it and transporting it.

Within a year of timber operations, Camber Timber Company began mining the area instead. All Timber operations had been stopped and incredible expense was incurred to build a mining company. They have been mining for almost 40 years with no sign of stopping. They are able to meet the cheapest coal prices which many believe isn’t survivable for company.

The group is being led by Luther who is imitating a German businessman who is trying to move money out of Germany before Hitler nationalizes everything.

They arrived at the one saloon mining camp and were immediately told that Boone would have to sleep in the barn. Luther would not tolerate this and eventually contacted the owner of the mine who agreed to host the party. The owner is still Owen Camber, with his assistant Rick “Chief” Bright.

Meanwhile Luther and the group met up with a mobile prostitute camp that had rented part of the saloon. The name of the group is the Red Crown, a group I don’t have much knowledge on but is probably another search group like ours.

An alliance was made, the Red Crown was led by Wilhelmina who is called “Willy” by close friends, a German actress/entertainer from Berlin. The groups seemed to get a long and Willy as her people call her agreed to house some of the members of the group.

Meanwhile Luther, Donnie, Jennie and Rachel went to Owen Camp’s house where they had drinks and hit it off. Jennie and Luther occupied Owen’s time and learned some info, that the mining company is looking for some form of diamond.

They also learned about Stuart being there and someone who went into the mine with the miners. His presence apparently keeps the miners healthier and able to work longer. The effect however is not easy on him.

Later that night Luther and Rachel snuck deeper into the house, found Betty’s brother Stuart’s room on the other side of the sleeping Chief. Rachel distracted Chief while Luther confirmed with Stuart who he was and to let him know he would be rescued.

The next morning Owen and Chief slept in due to the distractions, while Jennie and Luther went hunting. Outside they discovered no animals, and a unusual aura in the forest. Misty met up with Luther and relayed the locations of the mining personnel and then returned to the Red Crown’s troupe.

Luther and Jennie eventually found the monolith where Owen’s father’s men died. It was growing as Obsidian straight out of the ground, with unknown writing all over it. Luther took notes and Jennie took grave rubbings. They returned to the house to await the trip to the mine with Stuart and Owen. 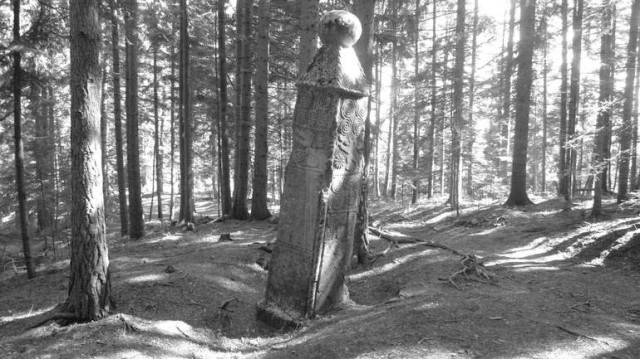 Obelisk from a different world

The group met up again, exchanged notes and then Luther, Jennie, Rachel and Donnie went down with the Chief and Owen to the mine. There they met up with Stuart as well as several miners. Down below there is an old settlement or town of serpentmen/lizardmen origin. The miners were using the underground river and a compressor to shave the walls of the abandoned settlement. Embedded within the walls were some sort of crystal like items.

They were unable to determine what the diamonds were for, but Luther pocketed some and noted where Owen kept them as they went back upstairs. When they got up there Luther was approached by Owen in a request to marry Rachel. This was not taken seriously, but it did let Luther implement a plan later that night.

The plan was to allow Rachel to occupy the Chief’s time, and then allow Jennie to assess the Chief when Rachel comes back. Which she did. Jennie was able to figure out that a different race originally lived at the obelisk location. Something came through the obelisk, destroyed them. Later a local tribe came into the area and was also destroyed. Fast forward a little while longer and Delco’s confederate unit was destroyed.

The vision continued and showed that about seven years after the loss of the confederate troops Delco returned and formed a timber company trying to destroy the forest. At some point Delco was held under sway of the Chief and instead began mining the ground in an attempt to get at that city. Delco grew older and Owen took over, and to this current day Owen is trying to dig out the lizardman/serpentman village under the sway of Chief.

Luther decided to destroy the obelisk and went up to the monolith’s site. There he found Chief camped a few hundred feet away. Rachel decided to go over to Chief and distract him while Luther set up explosives around the monolith. While he was there, Luther was approached by two zombie Cherokee which he killed without much effort. He signaled to Donnie to take out the Chief, which was followed up by Rachel using her telekentic ability on Chief.

This had some sort of effect on the miners in town. All of the residents and miners that had been in town for longer then a few weeks immediately left their homes/saloon and disappeared into the mine. Luther tried to chase after them to save them, and caught a glimpse of something in the dark, but the entire town disappeared.

Luther helped the remaining miners split their payroll and load the train with the obelisk to take home for study. The group said goodbyes to Willy’s group and came home, where he filled me in on the details, plus some personnel issues that had come up.

The mission went better than well, no one was hurt, the obelisk came back and everyone is excited that Stuart is here.

A middle aged gamer, photographer, accountant and social justice warrior.
View all posts by Redband Station →
This entry was posted in Case Files and tagged appalachia, mine. Bookmark the permalink.